By James Agberebi: Arsenal put their disappointing Emirates FA Cup ouster to Nottingham Forest behind them as they battled Chelsea to a 0-0 draw in the first-leg semi-final of the Carabao Cup at Stamford Bridge on Wednesday night.

It was the fourth meeting between both teams so far this season with Arsenal winning on penalties in the FA Community Shield while both clashes in the league ended in draws.

Super Eagles duo Alex Iwobi and Victor Moses were in action for their respective teams, with Iwobi having the most take-ons while also losing possession more than any other player in the game. 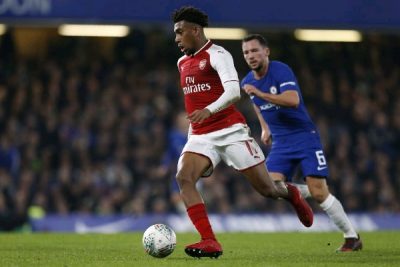 After an even opening stage, Arsenal had a decent chance in the 22nd minute through Alexandre Lacazette off a brilliant pass from Jack Wilshere but the French striker hit his effort over the bar.

In the 28th minute, Chelsea were unlucky not to take the lead as Moses saw his effort cannon off the post.

Moses’ Super Eagles teammate Iwobi had an attempt from range in the 38th minute only to see his shot punched away by Thibaut Courtois.

With one minute left in the first halftime, Cesc Fabregas should have given Chelsea the lead but headed straight at David Ospina.

Arsenal were forced into a change in the 57th minute as Wilshere, who was getting back in form after a long lay-off, went off with a knock and was replaced by Mohamed Elneny.

Moses then went close for Chelsea with a low shot destined for the back of the net only to see effort deflected over by Shkodran Mustafi.

In the 72nd minute, Iwobi burst through on goal but hit a lame effort which did not bother Courtois.

Eden Hazard responded with a Chelsea attack but was denied by a timely clearance by Ainsley Maitland-Niles after doing enough to beat his marker.

Hazard was once again unlucky not to give Chelsea the lead on 77 minutes as he saw his shot blocked by Rob Holding. 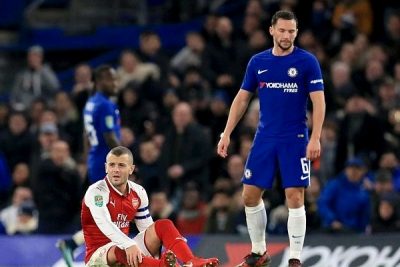 In the final minutes of the game, Chelsea had a shout for a penalty but the referee waved play on.

The Video Assistant Referee was used during the match.

The second-leg comes up on January 24 at the Emirates Stadium.

By Adeboye Amosu: The League Management Company have imposed a fine of  N2.75m  on three clubs Kano Pillars, Katsina United and Heartland for the unruly behaviour of their fans during their matchday  one fixtures in the Nigeria Professional Football League, reports Completesportsnigeria. com. Kano Pillars were slammed with a fine of N750,000 for the unsportsmanly […]

Super Eagles midfielder, Joel Obi, is set to join Turkish club, Alanyaspor from Italian outfit, Chievo Verona, reports Completesports.com. Obi’s transfer to Alanyaspor, according to Gianlucadimarzio.com will be completed before Thursday deadline for end of the winter transfer window. It will be first time Obi, who was in Nigeria’s squad to the 2018 FIFA World […]

The Ministry of Youth and Sports Development, through its Legal Department, has written to boxer Bash Ali to desist from peddling false claims about a non-existent approval from the office of the Minister to embark on a world fight. The Ministry reiterated that no such approval was given by the President, contrary to claims by […]