Odion Ighalo, has rejoined his Chinese Super League  (CSL ) club, Changchun Yatai for pre-season ahead of the new season which kicks off in

Ighalo’s arrival quashes, for now, any transfer reports linking him with a move away from the club during the January transfer window.
The 28 year old scored 15 goals in 27 appearances in his debut season with seven assists for Changchun Yatai who finished in seventh position
​in the CSL ​ 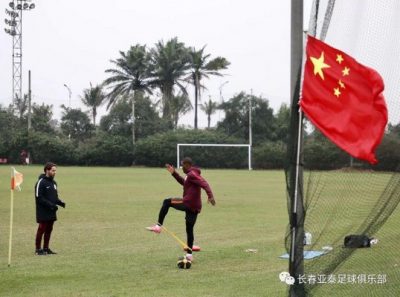 Ighalo posted a picture of himself running and undergoing some exercise with his fitness trainer, with a message beneath it on his official Twitter handle.
“Pre-season mode activated

,”Ighalo tweeted.
Changchun Yatai will kick off their season in the CSL with a home fixture against Beijing Renhe.
Ighalo recently helped the Super Eagles qualify for a sixth FIFA World Cup appearance, scoring one goal in three appearances for Nigeria in the African qualifiers.

Wilfred Ndidi is ecstatic to see his international teammate Kelechi Iheanacho rediscover top form for Leicester City, Completesports.com reports. Iheanacho has enjoyed a revival over the past two months, scoring six goals and providing four assists in 12 games since the start of December. And Ndidi is overjoyed for his fellow Nigerian who is back […]

Super Eagles coach Gernot Rohr reveals in this interview with Johnny Edward in Uyo how his team will approach the second leg fixture of the 2019 AFCON qualifiers against Libya in Sfax Tunisia on Tuesday. He also talks about the injury worries in his camp, and how delighted he is that Odion Ighalo proved his […]

DOUBLE DELIGHT: Ronaldo, Serie A Set For Debut On GOtv

When the new Italian league season kicks off on 19 August, all eyes would be on Cristiano Ronaldo, captain of Portugal and reigning FIFA World Player of the Year, who moved from Real Madrid after nine phenomenally successful years. Serie A, as the Italian league is famously called, will debut on all GOtv packages and […]